WATCH: Video of Vladimir Putin trembling goes viral on social media: Concerns about the health of Russian President Vladimir Putin were raised after a video of him was released. According to multiple sources, a resurfaced video of Russian tyrant Vladimir Putin “trembling uncontrollably” has fueled speculation that he is seriously ill. Because he trembles excessively in the video, it has fueled rumors that he has a serious health issue. According to media reports, a Russian tyrant’s hands are shaking uncontrollably as he greets Belarusian President Alexander Lukashenko at the Kremlin. 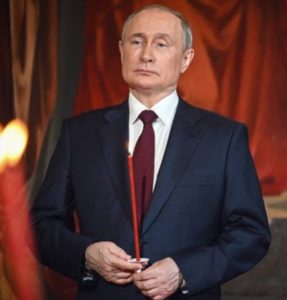 Putin, dogged by claims he has Parkinson’s disease or terminal cancer, reaches out his trembling hand to meet Lukashenko before quickly backing away and strolling across the room. Putin appears sleepy and his knees buckle as he leaves to hug his Belarusian counterpart, in footage that has been viewed over a million times. It comes as a video of Putin chewing his lip and twiddling his thumbs at a Sunday church service, fueling speculation that the tyrant is dying.

Vladimir Putin trembles in the video

At a midnight Orthodox Easter mass, Putin turned while holding a candle close to the altar. It came a day after a decrepit Putin, 69, was seen in video clinging to a table and slapping his foot, which Kremlin observers claimed showed him in a physically deplorable condition. On Sunday evening, he appeared less bloated than in recent weeks as he stood alone next to the city’s mayor Sergei Sobyanin at Moscow’s Cathedral of Christ the Savior.

Brief television recordings showed few clear signs of the tremors commonly associated with Parkinson’s disease. Onlookers, however, watched as the aging despot shifted uncomfortably, sticking out his tongue and chewing on his lip. Not only that, during Mass, he looks up at the ceiling and down as ordered by his pal Patriarch Kirill, who supported his invasion of Ukraine. On one occasion, the President was seen crossing himself slowly and carefully, trying hard to keep the movement under control.

According to Reuters, Hd spoke nothing but join the crowd with the reply, “Really, He rises.” The public appearance came just days after Putin was shown on Russian television delivering orders to Russian Defense Minister Sergei Shoigu to besiege Mariupol. According to observers, the isolated tyrant appears “powerless and barely able to stand up” in his chair.