According to police, Nimra Kazmi, a 14-year-old girl who went missing in Karachi’s Saudabad district last week, has been found in Dera Ghazi Khan.

However, they claimed Kazmi tied the knot “voluntarily.”

Similarly, the kidnapping of the girl was the second in as many weeks after Dua Zehra Kazmi, a teenager of the same age, reportedly disappeared from Karachi’s Al Falah on April 10 and has not yet been recovered. 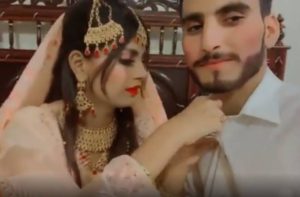 In a video message that has gone viral on social media, Nimra Shahrukh announces her marriage to Najeeb Shahrukh, her fiance-turned-husband.

She even claimed that she was not kidnapped or forced into marriage; rather she chose to do so.

Although no precise information about Shahrukh has been released, Nimra’s parents are said to have engaged her to Shah Rukh as a child, and she intended to marry him one day.

When Nimra’s parents tried to break off their engagement and marry her off to someone else, she ran away from home and married the man she loved on her own terms.

Nimra Kazmi, a missing girl, sends a video message to her family

After Nimra Kazmi disappeared in the Saudaabad district of Karachi, her video statement surfaced. Nimra’s lawyer issued a video statement in which she briefly introduces herself and states unequivocally that she was not kidnapped.

She even mentioned that after going out on April 17, she got married the next day. She also expresses her happiness and requests that her recordings be removed from social media.

Also, a video of Nimra’s wedding has surfaced on social media, in which she convinces a potential bride that she’s 18, when she’s actually 14.

Nonetheless, the video of Nimra and her husband cuddling using a Snapchat filter has gone viral with numerous comments.

Nimra Kazmi’s parents: who are they?

According to Nimra’s story, her parents tried to force her to marry an older man. Her father’s name is said to be Nadeem Kazmi but her mother’s name is unknown.

Her parents living in Karachi said that their daughter was in 10th grade and was preparing for her final exams.

Despite the lack of accurate information about her parents, it is clear that her mother is a working woman who claims her daughter disappeared after coming home from work.